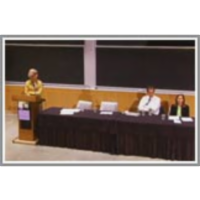 What's So Natural About Natural Disasters?

This video was recorded at MIT World Series: Big Questions After Big Hurricanes 2005. It seems as if humans conspire to aggravate many of our worst 'natural' disasters. David Mindell brings to mind the massive gridlock on one side of an interstate highway leading out of New Orleans, following Hurricane Katrina. In all the planning for a mass evacuation from this flood-prone area, did no one think to use all lanes of this highway? This "glaring omission," along with many others, says Mindell, is typical of a society that's dependent on technologically sophisticated, large-scale systems. Disasters open and expose the workings and vulnerabilities of man-made systems, which normally remain invisible. Mindell notes that the prosaic networks surrounding us, from highways to electrical power, sewers, water, and communication, are all more or less necessary for life as we know it—but some are necessary for survival. In earlier times, people saw divine retribution when earthquakes struck or volcanoes erupted. David Jones today sees a predictable phenomenon when disasters "collide with human populations:" the greatest harm nearly always falls on the poor and disenfranchised. This was true with last summer's crop of hurricanes. It's also true for heat waves, blizzards and tornadoes, which "like their more violent cousins have a preferential impact on the poor." Earthquakes "are slightly more egalitarian," Jones says, but in wealthier countries, our urban structures can better resist the shocks, whereas in poor nations like Turkey and Kashmir, little is left standing. Some epidemics have natural origins, then spiral out of control when they begin to circulate among humans, particularly those residing in the developing world. Jones believes we "could drastically reduce the mortality of disasters…simply by implementing policy based on current knowledge." Meg Jacobs sees a grim logic to the Bush administration's "unnatural" response to natural disaster. "What might appear as a political gaffe is the result of a quarter-century effort to purge the idea that government should respond to disaster," she claims. Look back to the energy crisis of the 1970s for the origins of this policy, because that's when those in power today, Rumsfeld and Cheney included, "first cut their political teeth." When the Arab oil boycott lowered American access to energy, leading to gas lines and a dramatic downturn in the economy, some politicians sought ways to soften the impact on people. Richard Nixon advocated energy conservation, but he also implemented a conservative free market approach to the energy crisis. From Nixon through current times, believes Jacobs, powerful people have "sought to undermine the legitimacy of state action from within government." Jacobs says the Bush administration has used the crisis of Katrina "to advance a conservative agenda," including the suspension of fair wage laws, reliance on individual charity and on corporations like Walmart.

Disciplines with similar materials as What's So Natural About Natural Disasters?

Other materials like What's So Natural About Natural Disasters?

You just viewed What's So Natural About Natural.... Please take a moment to rate this material.
Rate