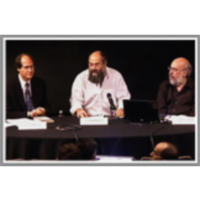 Our World Digitized: The Good, the Bad, the Ugly

This video was recorded at MIT Communications Forum. In conversation with Henry Jenkins, these speakers don't so much square off as share their hopes and fears for the emergence of online democracy. The first order of business, instructs Jenkins, is taking stock of the current "communication space" to assess whether current practices encourage the growth of digital democracy. Cass Sunstein gives the Internet a C-, for its "babble and excellence…brilliant insight and cruelty, that are not from the standpoint of self-government…what we deserve." Yochai Benkler, describing the "good public sphere," focuses less on sheer freedom of expression, and more on how people participate in "production of an agenda," and how they are enabled to "investigate, pursue, differ, err, correct and discuss." Sunstein bemoans the common opinion in the "geek world" that if you're sovereign over your own options, you can "declare victory and go home." In Sunstein's version of a well-functioning system of communication, "you don't construct a daily me, your communications cocoon, your little information chamber," but embrace "unanticipated exposure and shared experience." Such moments energize people, shifting them from passivity to active citizenship, declares Sunstein. Benkler sees the Internet as couched in the larger framework of power and elites, where government or commercially directed mass media typically produce our common experiences. But now, with the Web, "instead of having a few hundred or a few thousand people with a genuine ability to set the agenda, we instead have two to three million people who believe they can affect the agenda without kidding themselves too badly. That seems like a larger population that can push on power." This is a "significant change in citizenship from the idea of sitting in front of the TV." He finds particularly attractive organizations like Netroots, which prod traditional political parties in certain directions. But there's a possibility for fragmentation, and even dangerous polarization, Sunstein worries, with online communities clustering around similar interests and erecting bulwarks against contrary thinking. "The notion that freedom of choice, the ability to self-select and produce our own information content is a full cure for what ails us, runs into obstacles," he says. Benkler, though, believes the tendency to "tell each other how great and right we are and how wrong they are" is a plausible description "of how we've always been." He is happily observing a new generation of children grow up deeply imbedded in new technologies that help them develop an "attitude of seeking and being able to find." Sunstein summons his muse, Jane Jacobs, to describe his ideal: an Internet metropolis that mirrors the best an American city offers. "Walking along some street, you see a person, interaction, building that stuns you…If you really look, the fertility and surprise of that will alter what you're interested in, what you care about, your aesthetic and even political sense." Sunstein dreams of a digital world designed for serendipity, as well as norms of interaction, (such as on Wikipedia) that promote collaboration, self-correction and the prevention of lies and cruelty.

Disciplines with similar materials as Our World Digitized: The Good, the Bad, the Ugly

Other materials like Our World Digitized: The Good, the Bad, the Ugly

You just viewed Our World Digitized: The Good, the.... Please take a moment to rate this material.
Rate