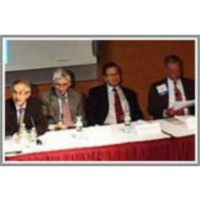 This video was recorded at MIT World Series: Second International Engineering Systems Symposium. These panelists use the lens of systems engineering to focus sharply on some signature global challenges in finance, healthcare, energy and IT. The system failure that undid the small but influential financial services industry was a few decades in the making, says John Reed. In the '80s, a sea change swept over firms trading hundreds of billions of dollars each day. The new mantra was "shareholder value." Firms ditched time-honored rules of capitalizing trades and guaranteeing risk in order to build investor profits. The crystallization of this philosophy was the mortgage-backed security. Trillions of dollars went into "off-balance-sheet investment vehicles." When the nation's mortgage portfolio deteriorated, not just one node in the system collapsed, but all of them. To fix the financial sector, says Reed, "A systems view will be essential, including behavioral considerations, not just economics." There's no point in saying U.S.healthcare is broken unless you can offer a vision. For Denis Cortese, this means designing a "learning organization." Cortese maps out this organization's goals: simple value, with "better outcomes, better safety, and better service at a lower cost over time." His proposed system would focus on the patient's needs in order to "raise the health of the entire population." Cortese doesn't see a role for the government in his ideal organization. But there must be better metrics for determining value, coordination among large and small healthcare organizations, and "common principles in the payer domain." Ultimately, we'll need to define quality healthcare and set outcomes: "It won't be perfect, but it will be better than where we are today." Nine billion people will inhabit the planet by 2100, and many of them will either be acquiring energy for the first time, or wanting more. This has "unpleasant if not catastrophic" implications for greenhouse gas emissions, says Steven Koonin. Powering up while securing affordable energy and minimizing emissions involves better modeling of the physical and biological climate system; overcoming the inertia of our current transportation and building industries; and improving the "patchwork" of our current energy grid. Koonin sees immediate opportunities to cut energy use in half in cities, but we "must bring policy up to speed" to make this happen. Tackling global problems won't be possible without an improvement in complex organizational systems, says Irving Wladawsky-Berger, which in contrast to physically engineered systems, haven't progressed in the past century or so. Change is creeping in, though, as organizations manage increasing amounts of data with more integrated instrumentation and swelling computer capacity. Wladawsky-Berger sees new tools emerging such as cloud computing and networked data centers, leading to the standardization and customization of services for producers and consumers. He believes that the "merging of the digital infrastructure with the physical infrastructure" will lead to new ways of life, including smarter cities with smart traffic systems that reduce congestion and pollution.

Disciplines with similar materials as Critical Issues and Grand Challenges