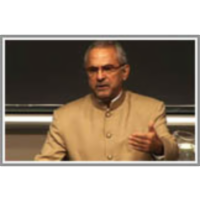 This video was recorded at MIT World Series: Nobel Laureate Speakers. At times humorous and other times defiant, José Ramos-Horta describes nurturing the 21st century's first sovereign state through its formative years. The journey of East Timor from brutal Indonesian rule to fragile self-governance has involved Ramos-Horta in conflict and debate from the halls of the U.N. to the smallest villages of this tiny Southeast Asian island. He describes the scene in 2002, after two years of UN-supervised transition, when Indonesia handed off a nation it had governed by force for decades: "A human calamity -- close to 200 thousand people lost their lives." Another 200 thousand were forcibly displaced into West Timor. As it departed "in anger and frustration," Indonesia's military orchestrated the destruction of the nation's cities, roads, schools and clinics. "The economy was at a standstill," says Ramos-Horta. "We received barely a sketch of a state, a skeleton." The challenge of rebuilding East Timor is all the more daunting given "the psychological-emotional trauma of 24 years of violence." There are bitter disputes involving how to conduct a national process of reconciliation. Western ambassadors recently called on Ramos-Horta, "representatives of two countries most notorious…for providing weapons and the red carpet treatment to the dictatorship of Indonesia." They advocated establishing an international tribunal to pursue crimes against humanity during Indonesian rule. Says Ramos-Horta, "Had I been in a bad mood, I would have said, 'Excuse me, the two of you are lecturing me on human rights and justice?'" Despite warnings from the U.N. that "lack of justice encourages impunity," he believes East Timor must travel its own path toward reconciliation. If East Timor set up such a tribunal, "Who would it start with -- Indonesia or the U.S., which provided weapons to Suharto, or Australia, or all of them at once?" He states, "If you pursue justice at any cost without being sensitive to the challenges and complexities on the ground, you undermine the incipient nation, democracy and justice." Today, when Ramos-Horta travels in the countryside, people don't want to discuss security and unity. Recounts Ramos-Horta, "They joke with me: 'Mr. President, we really like your road to peace, but we prefer a road to our village.'" He's now focused on providing his people with such essentials as clean water and electricity, and shoring up the nation's fragile social and economic institutions. "Let's put all the past behind us. Look after the victims, the wounded, in their minds, bodies and souls, build a country that is deserving of so much sacrifice. Chasing the ghosts of the past leads us nowhere," says Ramos-Horta.

Challenges in Nation Building is categorized in the following disciplines:

Disciplines with similar materials as Challenges in Nation Building

You just viewed Challenges in Nation Building. Please take a moment to rate this material.
Rate