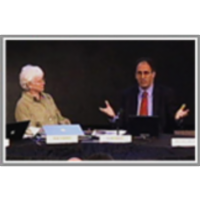 This video was recorded at MIT Communications Forum. With the right tools and backing, children of the 21st century are set to make their mark on the world. These panelists want to ensure that young people passionately engage with the world, using new media to "shape changes around them," as Mitchel Resnick puts it. For Lance Bennett, "the future of democracy seems to be at stake." Typically, schools fail to teach children politics, and civic education turns kids off. This is happening as modern society "falls apart in important ways," with social hierarchies and authorities fading in importance, and membership organizations that confer status losing clout. But new forms are emerging such as social networks and participatory media. Young people born into the digital age have a different take on citizenship, and are "predisposed for interacting, sharing knowledge across peer networks," for creating content and assessing the credibility of people and ideas in an egalitarian, collaborative enterprise. Civic learning can take place online. Bennett cites Your Revolution on Facebook, an online voting registration tool available in some states. He describes regional teens developing digital media skills to communicate about local issues, learning digital storytelling and advocacy strategies. In Puget Sound Off, Seattle teens use a website to express themselves with art, poetry and music, and discuss important issues like abusive relationships, and misogyny. In more than 100 Computer Clubhouses in 21 countries around the world, under-served 10 to 18-year-olds work with high end computers, mentored by adults to create, collaborate and enrich their communities in turn. As Ingeborg Endter tells it, they "use equipment without a lot of caveats – 'No' is not a word used often in Clubhouses." A Sao Paolo Clubhouse decided to beautify its neighborhood by painting murals in an alley. In an Arizona Clubhouse, Native American children engaged elders in recording traditional songs, and in Dublin, young people invited candidates for local council offices to come to their Clubhouse to discuss the issues. "They wanted their voices heard by candidates, even if they couldn't vote, "says Endter. The co-founder of City Year says it's time for a "new public philosophy, a new approach to solving problems." Alan Khazei wants massive citizen engagement via a universal voluntary service program, with lifelong opportunities starting as early as kindergarten. He envisions a new system for social entrepreneurship, so that when a good idea pops up, like Teach for America, it receives the resources to scale up rapidly. And novel public and private partnerships must be forged to enable these new enterprises. We'll need the active participation of millions of young people to tackle the gigantic issues defining our times, such as climate change and the war on terrorism, says Khazei. He proposes a Meta action tank, where social entrepreneurs can put ideas into action, engaging "grass tops and grass roots" locally and globally. Through this new type of action, "we can help create an America in which every person holds the highest office in the land, that of citizen."

Disciplines with similar materials as Youth and Civic Engagement

You just viewed Youth and Civic Engagement. Please take a moment to rate this material.
Rate