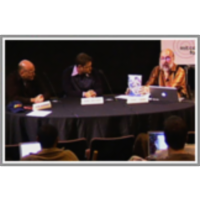 This video was recorded at MIT Communications Forum. Two progenitors of broadcast TV's rapid expansion into the digital world provide narrative and back story for the development of NBC's crossover series, Heroes. As moderator Henry Jenkins notes, in the last few years, there's been a fundamental shift in the habits of TV viewers, from watching shows broadcast at a specific time, to consuming those shows and related content through a variety of media at any time of day. Jesse Alexander helped usher in this transformation. He says Heroes was "conceived to take advantage of every possible media platform to tell stories, to make the brand viable and important in the world." Nowadays, to generate such "AAA franchise content," creators must incorporate "transmedia into the DNA of (their) concept." With Heroes, this has meant spinning off DVDs, greeting cards, comic books and webisodes with distinct narrative threads, and providing spaces online where core enthusiasts can opine on plot and character. The networks have recently jumped on the transmedia bandwagon, after watching fans, especially the youth demographic advertisers covet, flock to websites dedicated to serialized shows like on Heroes. "NBC used to say, just do a promo," says Mark Warshaw. But now, eager to wring profit from this phenomenon, NBC has set up a department to develop the series' online presence and other ancillary features. Network involvement in transmedia has pros and cons. "They're applying the same production standards to transmedia as to a $120 million dollar series. We need to move at the speed of the Internet, but they're moving at the speed of network TV." Warshaw, who's responsible in large part for originating these non-broadcast features, cleaves close to the series "bible" while creating "a network of channels for every kind of Heroes fan." Certain minor broadcast characters play central roles in webisodes, and are "used online to plant the seeds for future developments in the TV program." Because the series is available online (via both legal and illegal downloads), Warshaw reports with delight that Heroes is "a huge international hit." Before the program appeared in France, producers arranged a pre-broadcast event, and drew an audience that filled the largest theater in Europe. Show creators are trying to tap that global excitement and "create an anthology show based on heroes from around the world, in different time periods." Ultimately, Alexander and Warshaw hope to plumb the deep emotions and interests of a widespread fan community, and somehow "glean the most important information" from them to help shape offline and online content in a broad sense. Look for a mobile game and a novel down the road, but don't expect crass merchandising, say these panelists. Alexander notes, "As soon as a brand looks like it's selling out, it can crash and burn. With all the new potential revenue from internet and ancillary exploitation, there has to be oversight by our team to make sure it has the Heroes stamp of approval."

Other materials like NBC's Heroes: Appointment TV to Engagement TV